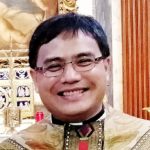 The Cowardly Lion set off with Dorothy for the Emerald City to ask the Wizard for some courage. Along the way, he had to face his fears as he encountered great dangers. Do we have to go to such great lengths to find courage? Happily, we don’t need a wizard; all we need is faith.

This Sunday’s Gospel tells us not to be afraid not once, not twice but three times. And Jeremiah in the first reading tells us that “the Lord is at my side, a mighty hero … I have committed my cause to him”. What other reassurance do we need? One is called first to be a disciple of Jesus, then an apostle for Jesus, and at all times to have courage because of Jesus. Courage, or fortitude, is one of the four pivotal or cardinal virtues of the moral life. It is also one of the seven gifts of the Holy Spirit.

What exactly is courage? Do we have to die for our faith like our countless martyrs to prove we have it? No, it is in our everyday lives that we can show courage. Once it took courage of a sort not to come to church. But for many today it takes courage to do the opposite: to attend Mass, or to stand up for Christian principles and beliefs, to swim against the tide of media brainwashing, cynical agnoticism and taunts of being out of date. Fortitude means physical courage to face pain or danger; moral courage to stand up for one’s beliefs; and spiritual courage to persevere in times of darkness, dwindling numbers and lack of success.

Just as the Cowardly Lion always had courage without him realising it – in the selfless and ready ways he stood by his friends without thought for his own safety – so we too must have faith that in times of crisis, the Holy Spirit will remind us of that gift He has already given us: courage. All we have to do is unwrap it and use it. As the saying goes, courage is not the lack of fear, but rather the doing of the right thing despite of your fear.