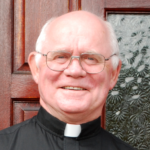 The First Reading shows how God remained faithful to his people in spite of their infidelities. God’s promises were not nullified by the sins of his people. It was because of their sins that God allowed his people to be exiled to Babylon. But his mercy is seen in their home-coming.
This leads into the Gospel. God’s love and mercy are seen in the fact that he sent his Son to save us. Jesus came into the world as a light. Sadly, some preferred darkness to the light , thus sealing their own condemnation. Judgement is not passed by God; people judge themselves by their response to the light.
That God took the initiative and gave his only Son, so that everyone who believes in him may not be lost but may have eternal life, These words are a good summary of the Good News. God chose the way of love , he acts , not for his own sake but for our sake. God is the father who is not happy or satisfied until all his wandering children have come home. His love is all inclusive, It is not directed towards one nation nor is it only for the good. It is directed at all nations, to the children of light and to the children of darkness.
But the passage also talks about judgement and condemnation. If God ‘s approach is so loving how can it include judgement and condemnation? How can condemnation be reconciled with love? Condemnation does not follow from God’s action but from people’s response. God condemns no one. People condemn themselves by adopting a negative attitude. God sent us the light. If people get lost it is because they haven’t accepted the light. The fault is not God’s but ours. Evil people hate the light because it reveals themselves to themselves. They hate goodness because it reveals their badness; they hate industry because it reveals their laziness. They will destroy the light, the goodness, the love, in order to escape the pain of self discovery. It is terrible to reject the light, to reject God’s order of love. Our part in the process of redemption is to accept the gift in all humility and try to respond in kind. We are able to love God because he loved us first.